So, leading up to jman’s birthday, In The Night Garden was still on at 6:30 of a night, often just was we were eating/ finishing dinner. Yes. I know. TV and dinner = bad.

But it got to be a bit of a thing. Jman always sits up to the table with us (note, we NEVER sat at the table before, but we decided it was important as a family thing once he started solids). Anyhoo , when it was on we would talk about the show, sing the songs, and, weirdly, we, the adults, got to quite like it.

One night, I suddenly went “hey, isn’t our yard a bit like the night garden?”. It’s green, it has rolling hills, it has trees, it has a corner with a pebble garden.

We freakin live in the night garden.

So I decided it would be kind of fun, and it would blow his tiny mind, if, for his birthday, I just night gardened up the yard. Because, you know. Planning a holiday, recovering from an ambulance trip, holding down a full time job, not enough of a challenge.

So prior to a fabulous holiday (there will be a post, I promise), I started collecting bits. I made the tardis like carriage out of a shoebox, a pad of coloured construction paper and glue. I also bought some old school pegs, red and blue felt, and whipped up a couple of pontipines.

Hub-in-boots thought they were excellent.

But the true test is a toddler, so I let him see it before the holiday, to see did he recognise it.

He nearly lost his mind! The pontipines house I painted out of an old red box that a gift hamper came in from a dear friend when I was on bedrest. There’s a nice poetry to that repurposing.

After the holiday, I lost momentum a bit. Anyway, below are very brief ideas of what I did to bring the night garden to the backyard…..wine helps. I’m a fan of wine craft. It’s like minecraft, only more social.
the pinky Ponk
THEIRS:

OURS: (draft form prior to final pimping)

If you only do one night garden craft, make a pinky Ponk! Get a big green balloon. Blow it up. Blow up bigger than you need, then let it down slightly this stretching seems to make it less likely the balloon will pop.

Stick on spots of Pink and yellow paper, then make crazy propellers. I used orange craft foam ( from a junk shop), cut into petal shapes and sticky taped. (Sellotaped) on so they stand up.

I made a nose out of a pink balloon, and tied the two balloon “necks” together.

I stuck a big propeller on the back with a pom pom glued into its centre. I tied it into the tree from two anchor points, so it didn’t blow around too much.

The main carriage:
Something red and lantern shaped!
Something for wheels ( I used milk bottle tops mounted on satay sticks)
Pom poms for decoration

Tardis carriage:
I cut out little windows on three sides, and covered the shoebox with blue paper, and lined the windows with yellow. I added thin yellow stripes.

To make the roof, I used left over corrugated cardboard from last years invites, painted it red, cut two squares of slightly different sizes, then cut diagonals into the corners so it would fold into a roof like shape.

To space the roof pieces I glued old blocks in between the red rooves, and mounted it all with a straw. The straw had a pom pom sewed on one end and blue tack on the other. I stuck the roof on the main box, and left the shoebox lid so he could lift it off and put things inside,

To stop the kids ripping off the paper stripes, I sprayed this with several coats of varnish.

The pumpkin:
I chopped up an old giant jar of protein powder, painted it green with yellow windows topped with red dots, and that was the pumpkin shaped ninky nonk carriage.

According to jman’s second favourite show, mister maker, you can get paint to stick to weird surfaces if you mix it with “gloopy glue” (PVA glue). He’s right! It’s not perfect, but it works.

I cut vertical slits all around the bottom piece, then just sort of sat the top piece inside it, so the carriage could still be opened and approximated a pumpkin shape. Another idea is to use a paper lantern.

The little house carriage, I made out of an old box of labels, adding a roof via a piece of red shoebox I rescued from the recycling bin.

The Aladdin ‘s lamp style carriage I really struggled with. I used a cheap zip up red sunglasses case, attached milk bottle top wheels, and a pom pom, and connected them all with crazy pipe cleaners. You could also paint a banana!

I wanted him to be able to investigate the ninky nonk, so I made sure everything could open. Then, the night before the party, I hid little surprises in the ninky nonk, like dried apricots, little packets of biscuits Etc. 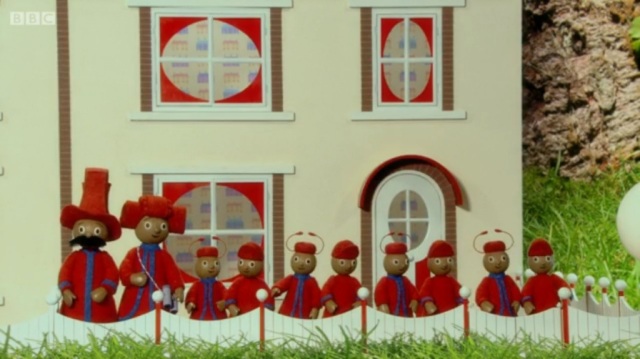 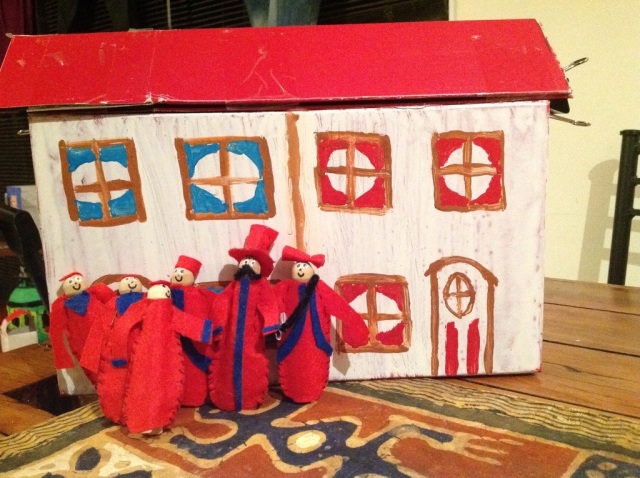 I needed something quick and easy for the pontipines, given there are ten. They wear red trimmed in royal blue, and they all have slightly different outfits.

*For daddy pontipine, a black pipe cleaner made his moustache. His hat is a tall square of felt, glued onto a circle of red felt then glued onto his peg head.
* mummy pontipines binoculars I made from two straws cut off and joined, and looped it around her neck with a pipe cleaner.
* the kids I just sewed red felt, trimmed with curves of blue felt and glue

Their outfits I sewed together. One side was a sort of a rounded out triangle, the other side was similar but I included arms. So the arms were one sided, not proper sleeves, and I didn’t bother with hands. I sewed them with a contrasting cottoned just over stitching the edges. Quick and dirty! The hats were getting really annoying and not working, so I just stuck felt circles on their heads, and drew faces with sharpie pens.

When I was over making them, I left three. I told jman they were pontipines doing a nudie run. Naturally, these became his favourites. They are now missing in action. Along with the chimney.

I wallpapered the pontipine ” house” inside with old wedding wrapping paper. It needs a chandelier, and I may add a small Xmas decoration for this later.

I decided I’d make some characters and stick them around the lawn, and I thought the haa hoos were prime candidates given their big bold shapes and basic design.

Originally, I’d planned to do these with balloons as suggested on the ceebeebies sites but I decided this was too risky if they all popped.

So I bought a roll of mixed colours A3 construction paper, and drew them over two sheets joined together.

Lay the A3 paper out, joining the sheets together with a slight overlap. Draw a dodgy starfish, or an “x” with an extra “arm” pointing straight up. Draw the ends of each “limb” blobby and rounded.

Go crazy with dots. Get toddler to help.

To make a standup character:

1. Cut out your paper figure
2. Glue this to cardboard, avoiding folds in the box where you can
3. Cut out, slowly, using a box cutter. Avoid toddler playing with box cutter.
4. Use Sellotape to stick a cardboard triangle-ish stand on the back, about 2/3 of the way up

If you wish to, turn into cardboard stand up figure.

Use blue or red paper.
Draw a blob!
Cover the blob in a checkerboard pattern. So if paper is blue, cut out red diamonds and assemble them all over the blue blobby haa hoo.

There is another haa hoo ( a big ass daisy), but I got tired.

So, for these guys I stole large bits of paper from a butcher paper flip board at work.

In fact, I needed large spaces to do it in, so I drew them at work! I thought these guys would look really dumb and be very hard but they were not. I am no artist.

Iggle piggle I felt would look more convincing if he was doing something, so he’s in a sort of dance-y position. I just sketched him free hand looking at a picture. I painted him blue ( cobalt blue mixed with white), and drew on his red hair, black eyes and mouth.

Upsy daisy is quite easy if you just concentrate on one element at a time, and get the colours right! Because they are simple, Childlike characters, they are easy to draw. If you struggle, some people on the net used and overhead projector to project and trace them onto big paper. I originally wanted to so this, but I think they turned out ok freehand. Another idea is find colouring in sheets on sites like ceebeebies, as the one dimensional simplified image is easier to copy. 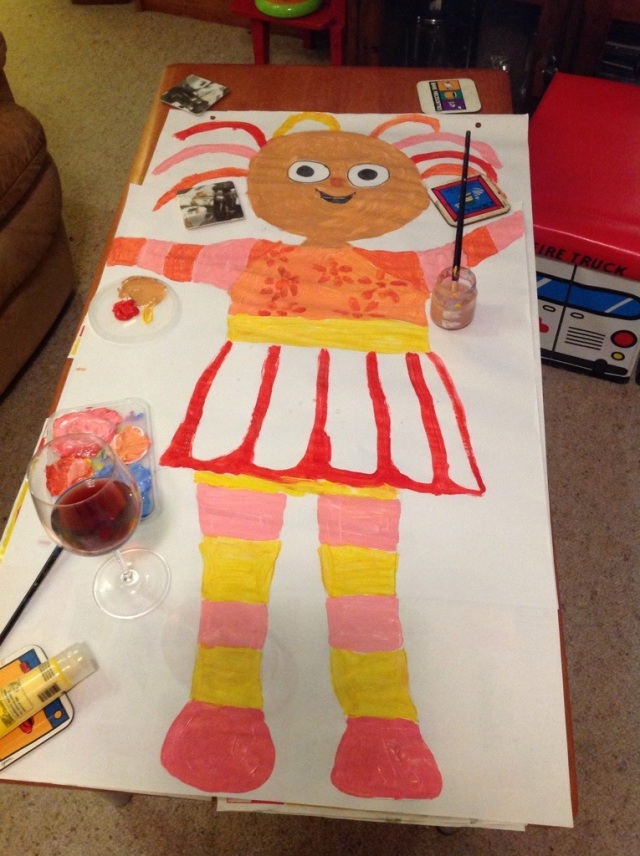 Subcontract out birthday cake to niece, who is very clever!

Stick the two large together using your spaghetti spine. On top of makka pakka’s head, stick the spaghetti through a flattened out sultana.This is safer than toothpicks and more digestible. The head is “circle facing you”, the body is longways.

Using the first cross bar, insert spaghetti into makka pakkas head like the bolts on Frankenstein. Add sultanas on either side like ears.

Optionally, you can stick the sultanas on with icing.

Use the second cross bar through his body, to stick on small marshmallow arms.

Draw on a smiley face with melted chocolate. Makka pakka! 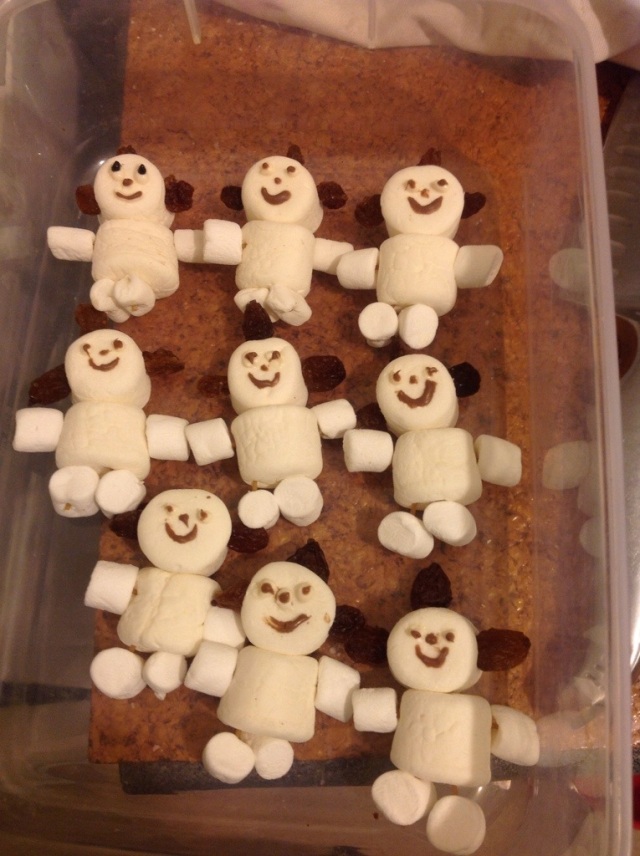 I found some little teeny tiny low sugar gingerbread men we occasionally buy. Of course you could make your own, but i was short on time. I used coloured chocolate (white chocolate and powdered food dye works best), and piped on an overall colour with a very fine nozzle , let this dry for 10-15 minutes, then piped on contrasting dots and squiggles for hair.

The most fiddly part were the eyes. I tried a few things and settled on pre made icing writing tubes, using white then black dots for pupils. Don’t do them too large or cute tombliboo becomes scary Sid vicious meets alien. Well, mine did. 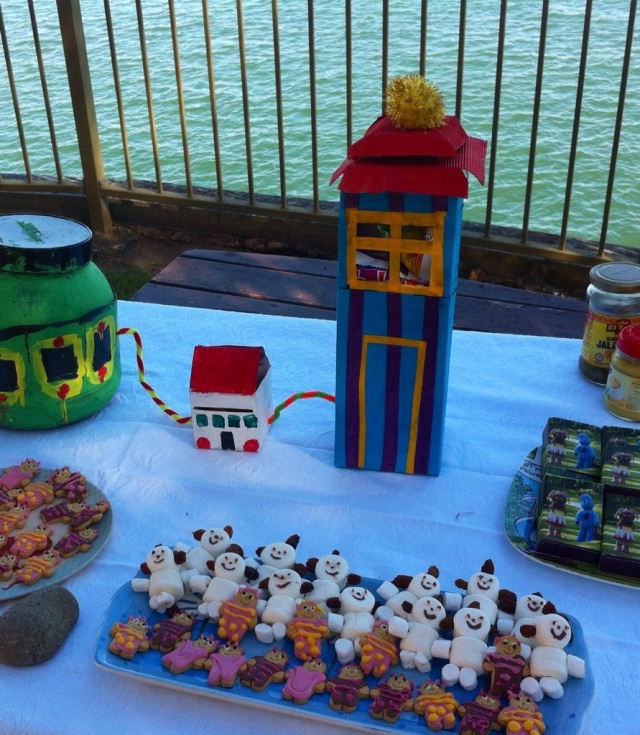 I experimented with icing the tombliboos, but I’ve made a lot of handmade chocolates in the past, so I found chocolate easier. Go with your strengths, I say. The first batch looked like a “saw this on Pinterest, nailed it ” attempt! I got better. I didn’t paint on smiles, as on the little gingerbread faces they just turned into total freaks that would frighten the children. Keep it simple. This would be easier to do on larger biscuits, but I was trying to avoid giving the kids too much sugar or colouring, so the smaller the better for me.

Hub-in-boots was along for the ride, and he brilliantly thought up a watermelon house. Of course, watermelons are out of season here, and he found the shop with the largest possible watermelons and didn’t check the price. $35 later….and he forgot to carve it!!!!

Sometime into the party, the tombliboo house appeared. It was way cool. Problem is, I’m not sure we got a photo! We ate a lot of watermelon. A LOT. OF. WATERMELON. We also had party number 2 at mums, and as you can see he’s getting hard to keep up with! More on life at 2 and holidays soon. X 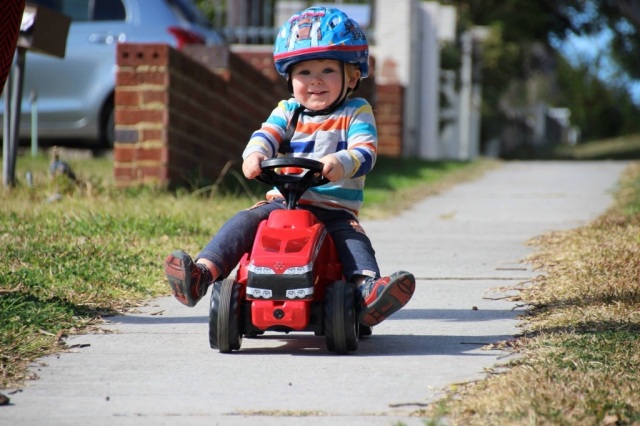 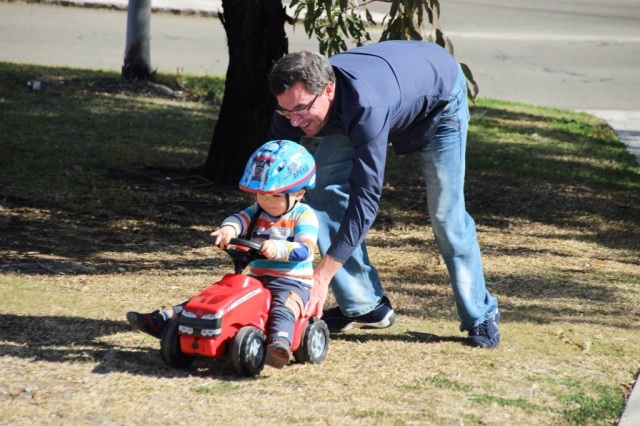